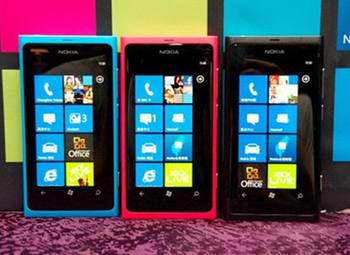 The same touch screen, the same size, the same degree of thickness and thickness ... do not see LOGO, do not know which brand of mobile phone. With the popularization of smart phones, the phenomenon of homogeneity has become increasingly evident. From the appearance to the system, the problem is not only plagued An-droid manufacturers, but also for the mobile phone manufacturers using Microsoft's WP system.

Appearance of the similar system at the end of the same year, Nokia and HTC two manufacturers have released their own WP8 phone. Both companies emphasized "design" at the press conference. Nokia emphasized the appearance of the Lumia series and the design of its materials and features. At the launch of the HTC, the companyâ€™s chief designer, Thomas Jianzhilin (rather than the traditional product manager), introduced the product.

However, one of the problems faced by WP handset manufacturers is that, apart from design, what is the difference between their respective products? Microsoft has set up the UI of the product. At the same time, it has strict control over the hardware configuration of the mobile phone. The selling points and features of different brands of different products are basically the same, and even the products of the same product line cannot highlight the price level. To distinguish between products, to make a choice is basically a foggy thing, Nokia Lumia 920 and HTC 8X difference? Why should we choose this instead of that? In addition to the different recognition of Nokia and HTC brands, the rest is probably only designed.

The design emphasized by the manufacturers is similar to that of consumers. The New Express reporter visited a number of mobile phone stores in the city of Guangzhou. It was found that a small number of WP mobile phones are almost monochromatic touch-sensitive models in appearance, and the system and user interface are even more uniform. A consumer who chooses a mobile phone told reporters: â€œWith a few Android phones, I would like to use my WP phone for mobile phones. I didnâ€™t know how to choose several models. The appearance is similar, the system is the same, and the hardware configuration is not much different. Which one do you want to buy cheaply." Homogeneity cannot be avoided?

To some extent, the homogeneity of WP mobile phones and Microsoft's strict requirements are not unrelated. Why does Microsoft want to limit hardware specifications? This of course has its own considerations, of which ensuring the fluency of the system operation is the most critical. A new system needs to create its own image in the user group. The first is to give the user the best operating results. The hardware specifications are unified so that the configuration of the mobile phone can be guaranteed enough to allow users to try various mobile phones. Can have the same excellent feeling. However, the problem also followed, and the unified configuration did guarantee the performance of each mobile phone adopting the WP system. However, how does the competition between products and products, brands and brands develop?

Not only the hardware configuration, but also the unified WP UI interface, and Android system is not the same, different terminal manufacturers will develop a different interface. Terminal manufacturers, operators, and developers cannot modify the interface of the WP system. They can only serve the users on the premise that they follow the display and usage of the established interface. Obviously, the hardware limitations are due to the same considerations. The purpose is to give users the best experience. The benefits of a unified UI interface are obvious. Users can change their mobile phone products in the same system. There is no inconvenience in use and they can be used quickly. The iPhone is a best example. However, the hidden worry is that users are prone to "aesthetic fatigue." Or the price war Microsoft's official data show that since Microsoft released the WP8 system in October last year, the total amount of smart phones on the WP platform has accounted for about 5% of the world. Analysts pointed out that it is a good thing that WPâ€™s current lineup is getting bigger, but there are internal disharmony factors that cannot be ignored. First of all, in addition to Nokia, Samsung and HTC and other manufacturers' WP phones are positioned at the lower end. This is because they take into account the positioning of the Nokia WP new machine is relatively high-end, and their own focus is still on the Android platform, in order not to form a threat to its high-end models have this measure.

In the Android camp, domestic manufacturers are currently working on thousands of mobile phones to seize the low-end market. As the homogenization trend becomes more and more obvious, this situation will continue into the WP camp, and the price war is inevitable.

According to industry sources, the homogenization of smart phones is mainly due to the general direction. The single choice of system platform, the simple source of user experience, and the over-construction of product design, often pursue quantity and ignore the overall design. The sequel products are frequently launched, causing consumer fatigue, and over-pursuing the hardware to create the first, resulting in too much neglect in other aspects.

In the era of mobile Internet, the key to success in the era of smart phones has shifted from the initial price, appearance, to the direction of quality, use and personalization. To break the homogeneity and to have more opportunities in the market, handset makers must have their own "originality" and break the market stalemate through "originality."

The right angle d-sub is an ideal connector solution for applications where space is at a premium and there is little to no room for connectivity & cabling. The 90Â­Â­ÂÂ° angle cable exit allows for increased mounting options and versatility of design for those tighter, more compact application needs such as computer servers and industrial robotics.