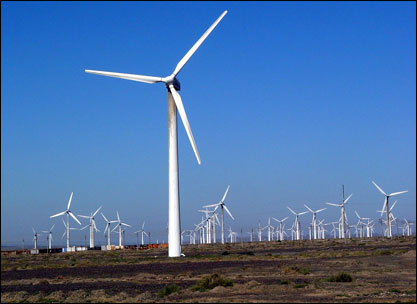 The severe situation faced by wind power has seriously hampered the sustainable and healthy development of the industry: The contradiction between wind power and conventional power sources, especially in the heating period and the thermal power units, and the inability of existing power operation systems to adapt to the high proportion of wind power access requirements have become a constraint on wind power. The primary factor for development. At present, it has become the consensus of the entire industry to break through the traditional power operation system through the innovation of institutional mechanisms and rationalize wind power and other interest conflicts between renewable energy and traditional energy sources through market-oriented means.

Initially, we talked about "crossing the river by feeling the stones." Now, we have become the world's largest wind power country. The scale of wind power has not been a "little trick" ten years ago. We have scored many achievements, but there are some lessons and deficiencies. The wind power industry should also reflect on what, and it must come to the stage of systematic conclusion.

The first and foremost is that with the continuous advancement of technology and continuous changes in the situation, the strategic position of wind power and other renewable energy sources in future energy production and supply systems needs to be repositioned and clearly defined in the country's overall strategy. At present, many countries have set goals for the 2030-2050 energy system construction with renewable energy as the main body. On the other hand, there is still considerable controversy over whether domestic wind power belongs to major energy or supplementary energy. Many experts have emphasized the dominant position of traditional coal-fired power on different occasions, but deliberately or unintentionally ignored the huge changes in the external environment. With China's greenhouse gas emissions accounting for more than 40% of the total global emissions, how to face the international community's rightful attitude in upholding coal's dominant position is indeed a very costly matter.

The second step is to start early research and build a new intelligent power system centered on renewable energy. We need to prepare for the rebuilding of the power system based on the resources of China's renewable energy resources, especially the characteristics of the distribution of wind resources away from the load. The reconstructed power system should focus on rapid response to the load, use renewable energy as the main body, and coordinate the construction of the power grid and other power supplies. By then, the power system dominated by renewable energy must be given priority for local consumption, and then consider long-distance delivery. This requires a specific analysis of the actual situation in each province, and adopts development strategies that suit local conditions.

The â€œThird Industrial Revolutionâ€ triggered peopleâ€™s comprehensive thinking on the future power system, how they can not be left behind in the already initiated energy production and consumption revolution, and how to accelerate the promotion of wind power in strict accordance with the requirements of the Partyâ€™s â€œeighteenthâ€ report. The development of renewable energy, such as photovoltaic power generation, requires national energy authorities, local governments at all levels, power grid companies, and wind power development companies to pool collective wisdom and surpass their respective interests to continuously carry out innovative institutional mechanisms. A new round of development of wind power.

If you have any questions, please contact with us directly. Crawler tractors are produced by our company with high quality and good appearance. Welcome you can visit our factory.for inqury, Please send mail directly to us!