In the general-purpose processor market classification, in terms of function and execution speed, it is roughly divided into CPU > MPU > MCU. The CPU has the strongest function, mainly used in computer products; the MPU function is second, its application is diversified, mainly used in embedded systems and compact computers; and MCU is based on a single application, applied to various home appliances. Control applications such as electronics, embedded products, wearable devices, and Internet of Things (IoT) applications. 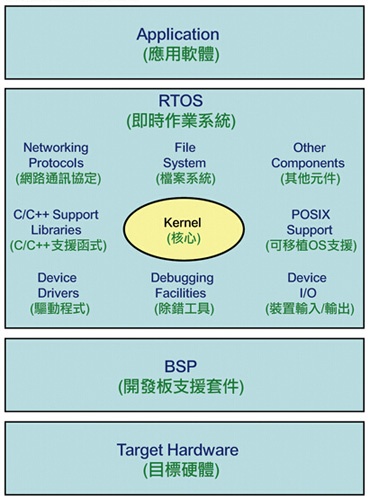 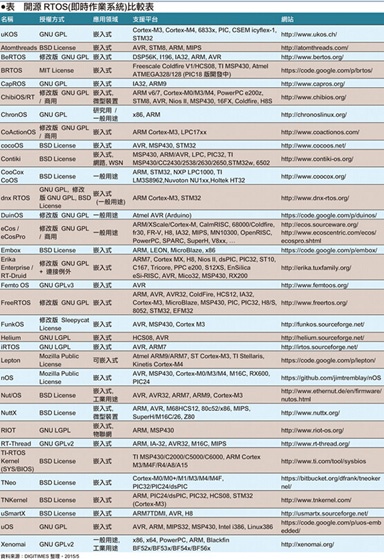 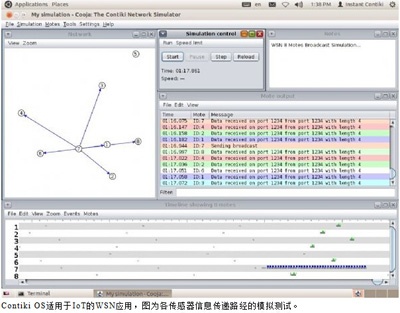 The MCU integrates a CPU of KHz to MHz level, a memory unit of KB to MB level (RAM and ROM/EEPROM/Flash), an Oscillator (Clock Generator), and an I/O expansion unit. A slower system single-chip (SoC).

Due to the small internal memory capacity, large operating systems such as Windows and Linux cannot be inserted into the MCU, and most of the MCUs are used in real-time controlled environments. Therefore, many RTOSs with low capacity (Real-TIme OperaTIng System; real-time The operating system) has become the main platform for developing MCU software.

There are many types of RTOS, and the main design is for embedded systems based on MPU or MCU. For example, the MPU level is dedicated to powerful RTOS such as Integrity, QNX, VxWorks, etc. As for the smaller size, mainly supporting MCU-level RTOS, there are Nucleus, ThreadX, Unison OS, ucOS II/III and so on.

Take Integrity OS from Green Hills Software as an example, it is an RTOS that supports MPU (or even CPU level). The strength is that the Integrity-178 version has passed EAL 6+? (Information Security) Certification and DO-178B (Fei'an Environment) Class A certification, used in markets where security and reliability are highly valued, such as fighters (eg B-2, F-16, F-22, F-35) With civil aviation (such as Airbus A380) and other fields. The RTOS supports ARM, XScale, Blackfin, Freescale (incorporated with NXP) ColdFire, MIPS, PowerPC, AMD x86 (embedded APU) and other CPU/MPU platforms.

Another well-known QNX RTOS, using the micro-core architecture, is the only OS that has successfully entered the commercial market. Its strength is the real-time processing capability of multimedia, suitable for embedded markets such as entertainment devices and mobile phones on the car. QNX was acquired by BlackBerry in 2010 and developed the BB 10 operating system. QNX supports CPU/MPU platforms such as IA32, MIPS, PowerPC, SH-4, ARM, StrongARM, and XScale.

As for IntervalZero's RTX and RTX64, it is an RTOS designed to coexist with Microsoft Windows, with the EtherCAT protocol as a factory automation application. Among them, Windows is mainly responsible for GUI, storage and computing. RTX is responsible for real-time industrial control and data collection, making industrial software development easier. The above RTOSs are MB to GB level MPU level OS, not applicable to the MCU environment.

The low-end RTOS part is mainly to simplify the software functions to MB or even KB level, so that the entire OS and main applications can be inserted into the ROM/EEPROM/Flash in the MCU. Due to the wider field of MCU applications, the software must strive to be more streamlined. Therefore, most of the MCU-specific RTOSs have a very highly modular architecture, which can be measured from the core, drivers, file systems, peripheral I/O, network support, etc. Customized to facilitate the rapid launch of products.

Some commercial RTOSs provide source code to authorized customers, while open source RTOSs are more free to use, allowing developers to compile programs with minimal code and optimized execution.

At present, MCU OS/IDE has the highest market share, most of which are commercial RTOSs launched by software companies (with MCU products from various manufacturers). However, with the introduction of Cortex-M, Cortex-R and other instruction set architectures, ARM has entered the wearables. In the networked application market, the RTOS of the ARM architecture (open source) has begun to increase.

Nucleus, introduced by Accored Technology of Mentor Graphics, is designed by Microkernel and claims to have 3 billion devices imported. The advantage is that the core length can be as small as 2KB, and developers do not need to write BSP for embedded devices (development board support package) Therefore, it is widely used in consumer electronics, mobile devices, automotive electronics, smart energy, medical equipment, industrial / industrial control and other fields.

Express Logic's ThreadX is a royalty-free RTOS with the advantage of ultra-fast boot time and response time. Its Picokernel core length is less than 2KB, and it is said to have 2.1 billion devices imported through security specifications. use. For example, HP's printers and transaction machines use the RTOS. A wide range of 32-bit MCUs are supported, including ARM, Atmel, BlackFin, CoreFire/68K, EFM32, Freescale (NXP), FM3, H8, XMC, M-Core, MicroBlaze, MIPS, Nios II, Power, STM32, StrongARM , Synopsys ARC, TI, Win32, x86/x386, XScale, and more.

The new version of VxWorks 7 is aimed at enhancing the scalability, security, connectivity, graphics capabilities, virtualization, etc. that IoT requires, while the full-featured VxWorks microcore is only 20KB in length. VxWorks is widely used by the technology industry. Curiosity (Curious) landing on Mars uses VxWorks. The RTOS supports Intel x86 (including Quark SoC and x86-64), MIPS, PowerPC, SH-4, ARM and other CPU/MPU architectures.

RoweBots' Unison OS is an RTOS that is fully compatible with POSIX (Portable Operating System Interface). It is suitable for 32-bit hardware development environments such as MCU, DSC, DSP, SoC, FPGA, etc. Networked applications enhance their system security, and core code can be as low as 1KB in some application architectures. Supports 32-bit MCUs such as Microchip PIC32, Renesas R32C/SH2A, ST STM32, TI ARM Cortex-M3.

Micrium's Î¼c/OS-II (microcontroller OS version 2) is a portable, scalable, and preemptive RTOS core that can manage up to 250 application tasks in ROM. Îœc/OS-III focuses on unlimited application tasks, nearly zero-breaking, and provides source code to customers.

The advantage is that the original code of the system is open, neat and consistent, detailed and detailed, and also passed FAA certification and DO-178B certification, suitable for various embedded and IoT system development, the core size is from 5 or 6KB to 24KB. As for the Î¼c/OS-III HW-RTOS, it is hardware acceleration for the ARM Cortex-M-based MCU. The RTOS can support more than 100 DSPs, MPUs, and MCUs.

In recent years, ARM processors have swept the global smart mobile device (mobile/tablet) market, in addition to the commercial RTOS/IDE launched by each MCU/MPU hardware platform, in order to enter the IoT and wearable MCU-level applications, ARM introduced the Cortex-M and Cortex-R instruction set architecture, with open source OS/IDE to seize the MCU application market.

In addition, there are many open source OSs (non-RTOS) designed for MCUs, but they also have small size features, some of which are WSN (Wireless Sensing Network) applications for IoT, such as Contiki OS and TinyOS. Others have a general desktop graphical user interface (GUI), such as SymbOS, Wheels OS, and so on.

As for SymbOS, it is a free multimedia graphics operating system that can be executed on an antique computer with an 8-bit Z80 CPU (such as MSX, Amstrad), giving Windows 95-like operation screens and rejuvenating old computers.

The high energy from short wavelength UVC light is absorbed in the cellular RNA and DNA, damaging nucleic acids and preventing microorganisms from infecting and reproducing.

This absorption of UVC energy forms new bonds between nucleotides, creating double bonds or dimers." Dimerization of molecules, particularly thymine, is the most common type of damage incurred by UVC light in microorganisms.

Formation of thymine dimers in the DNA of bacteria and viruses prevents replication and ability to infect.