In the country's upgrading strategy, it is an important way for Chinese enterprises to better upgrade and develop the combination of intelligent and industrialization. In October last year, the Chinese and German governments issued the "Sino-German Cooperation Program Outline" after the third round of consultations, announcing that the two countries will carry out "Industry 4.0" cooperation. Cooperation in this field is expected to become a new direction for Sino-German future industrial cooperation.

According to the analysis, Industry 4.0 is expected to promote the further development and progress of relevant domestic industries and enterprises. In the capital market, the related topics of Industry 4.0 and listed companies are also one of the objects of intense pursuit of funds. Among them, the industrial Internet, industrial automation and industrial robot segmentation areas have received much attention and expectation.

Focus on the research of intelligent production systems and processes, as well as the realization of networked distributed production facilities. 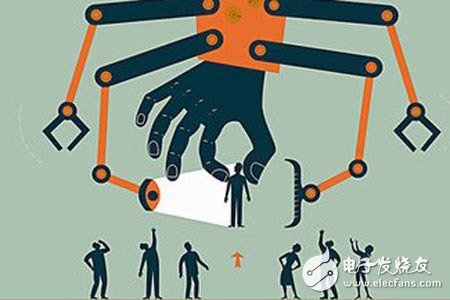 "Made in China 2025" will kick off the industrial Internet. The analysis believes that investors should look for investment opportunities from the three aspects of industrial data perception, transmission and analysis, and focus on Jiaxun Feihong, Zhongheng Electric, Halo New Network, and Dongfang Guoxin.

From a global perspective, the current industrial Internet has received the attention of many countries - the international industrial Internet representatives are the United States' advanced manufacturing strategy, and the German industry 4.0. Through the Internet, big data, cloud computing, broadband network and other technologies, through access to sensors, information sensing, network communication, remote control and collaboration of physical devices are realized. Earlier, it was reported that GE Corporation of the United States proposed the concept of industrial Internet and invested 1 billion US dollars to improve efficiency. The German Industry 4.0 Germany divides the industry into four stages: mechanization, electrification, digitization, and intelligent manufacturing.

Judging from the domestic situation, the report of the 18th National Congress of the Communist Party of China proposes the direction of integration of four technologies and deep integration of the two. And "Made in China 2025" is considered to be the prelude to the industrial Internet. Some analysts pointed out that in the next 20 years, China's industrial Internet development will bring at least 3 trillion US dollars of GDP growth. After the application of the Industrial Internet, the efficiency of enterprises will increase by about 20%, the cost can be reduced by 20%, and energy conservation and emission reduction can be reduced by about 10%.

â€œMade in China 2025â€ is the first step in the â€œthree-stepâ€ strategy of manufacturing in China. The analysis pointed out that as part of a major national strategy in the future, industrial automation is considered to be one of the branches with medium and long-term highs.

2015 is the first year of industrial automation. Relevant key implementation areas have been defined in the new information technology industry, bio-manufacturing industry, high-end equipment manufacturing industry, and new energy industry. Relevant planning is also expected to be released soon. Some market participants analyzed that the urgent need for industrial upgrading and transformation will prompt the field to grow rapidly, and related listed companies may pay due attention in the medium and long term.

Wang Weiming, an analyst at Soochow Securities, said that industrial automation equipment belongs to the category of intelligent equipment and is a strategic emerging industry supported by the state during the â€œTwelfth Five-Year Planâ€ period. (In October 2010, the State Council on Accelerating the Cultivation and Development of Strategic Emerging Industries Decision"). In the next five years, with the disappearance of the demographic dividend and the rising cost of raw materials and energy, China's manufacturing industry will undergo a historic transition from extensive, low value-added models to intensive and high value-added models. As the "stone" of high-end manufacturing, industrial automation equipment faces the dual opportunities of upgrading traditional industries and developing new industries. â€œThere will be two significant high-speed growth lines in the industry. First, high-end intelligent equipment accelerates growth. The growth rate of CNC machine tools, process automation systems, inverters and other products with high penetration rate has slowed down significantly. As the low-end labor costs accelerate and the industrial upgrading enters a hot stage, high-end intelligent equipment with stronger 'substituting artificial' attributes and lower penetration rate, such as industrial robots, automated assembly lines, automated storage equipment, etc., is expected to cross product introduction. In the next five years, it will maintain an average annual growth rate of 20-30%.â€ Wang Weiming also said that the second high-speed growth line is the local automation leader is expected to rise. "By benefiting from the policy intentions of the country to support the improvement of localization rate and the breakthrough of key components, domestic automation equipment enterprises with strong core technology and strong R&D capabilities are expected to accelerate the speed of import substitution and achieve higher than average growth of the industry."

The industry enters the golden growth period, the R&D company becomes the target of capital pursuit

In the upcoming "Made in China 2025" plan, the robot ranks second among the top ten key promotion areas. From the perspective of the whole country, the number of industrial robot parks has grown to more than 40, and the number of robot enterprises has exceeded 500.

Among the three major themes of Industry 4.0, robots are essential for intelligent production. The data shows that in 2013, China's new robots reached 37,000 units, and it became the country with the largest number of industrial robots in the world. In 2014, this figure has risen to about 56,000 units, of which more than 10,000 are made in China. It is expected that by 2017, China's industrial robot ownership will become the world's number one. Industry insiders generally expect that with the implementation of "Made in China 2025", China's robot industry will also usher in a golden period of rapid growth.

Compared with foreign countries, it can be clearly seen that the per capita possession of robots in China is still far behind the world average. In China, there are about 30 robots per 10,000 factory workers. Germany's "robot density" is 10 times that of China, and Japan is 11 times that of China. This brings rigid demand to the application of industrial robots.

Previously, industrial robots mainly replaced heavy physical labor and complex labor to solve the problem of manpower working in harsh environments; now they are turning to a simple and repetitive place where labor is heavily used. Nowadays, after 80s and 90s, they are not willing to engage in simple repeated work, so machine replacement has become an important trend in the future development.

It is worth noting that many traditional industries in China are markets that robots will expand in the future, such as home appliances, rail transit, and ships. For now, robots have already entered the field of home appliances. Midea has started to promote production automation on a large scale since 2012. By the end of 2014, there have been 800 six-axis robots. In 2015, the group is expected to add 600 more. And in 2015, Midea invested 800 million yuan to 100 million yuan to make automation transformation. Galanz and Zhigao have also introduced automated production lines.

In the upcoming "Made in China 2025" plan, the robot ranks second among the top ten key promotion areas. From the perspective of the whole country, the robot industry has begun to expand in full swing. More than 40 industrial robot parks have been developed. The number of robot companies exceeded 500.

Our Ul Certified Switches are mainly 3 Position Key Switch with 19mm Installation size. This series is a representative , competitive and hot product in our products catalog.

UL Certified Electric Key Switch, which indicates the Key Switches that have UL certification. The UL Safety Laboratory is the most authoritative in the United States and the largest private institution in the world for safety testing and identification. 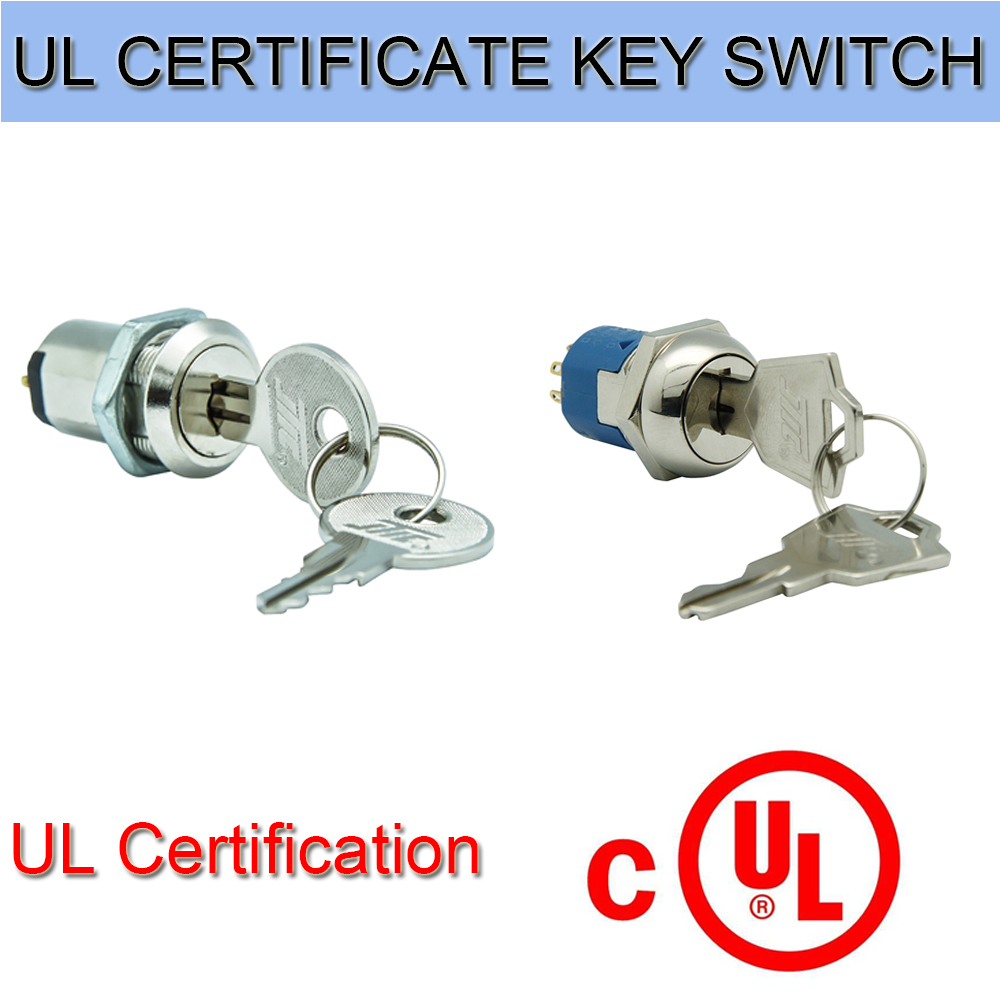 We are always insisted on the quality of the Key Lock Switch, so our key switches with supreme quality could be investigated. If the client receive abnormal quality, the quality team meeting will be held actively to rigorously analyze the cause of the Abnormal product and make the correct solution. The same batch of materials should be separated in time to ensure that similar quality anomalies wont happen again, so we could achieve the goal that corrective and preventive measures are taken to make efficient solutions for the UL series of Key Switches used by customers. 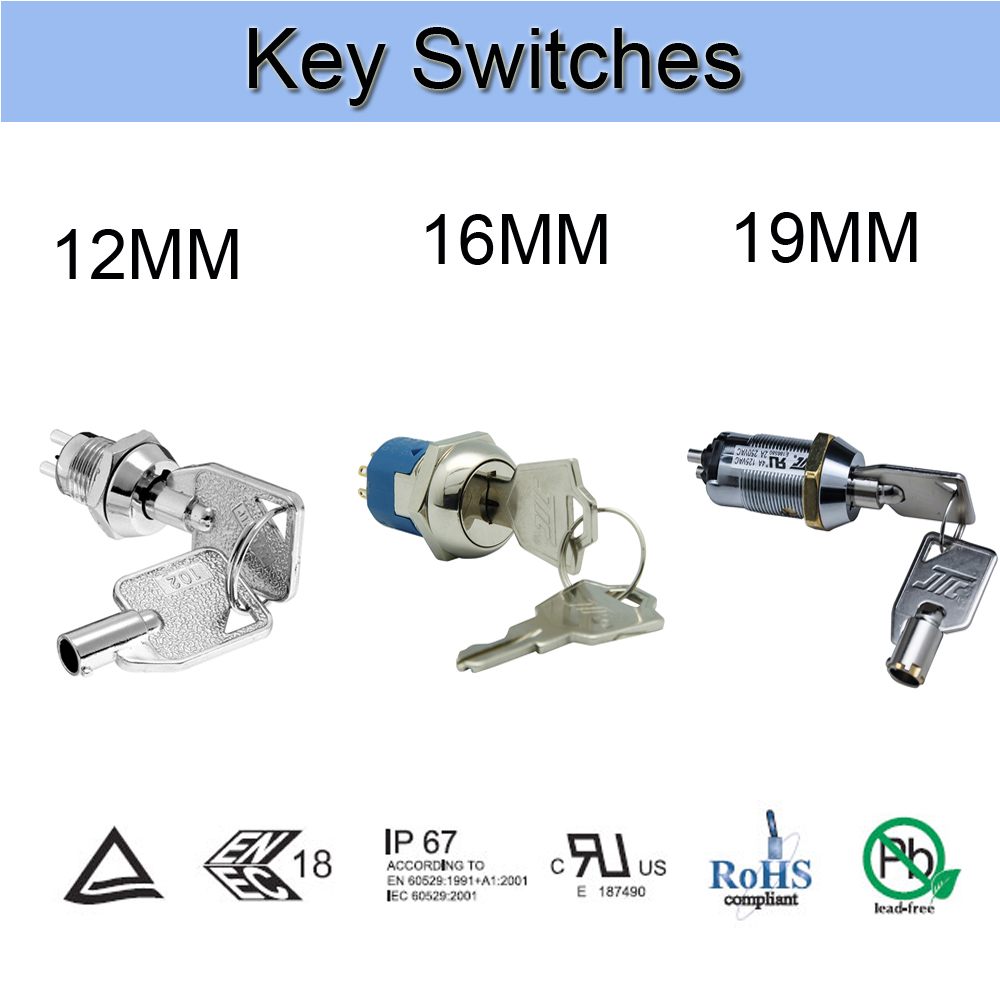